I woke up early this morning and, as I do, I read a few pages from the book I’m currently perusing. Then I balanced my weekend spending to Quicken. I updated my quality of life spreadsheet and found it satisfying, so I moved on to other things.

“Perfect,” Tom said to Tom, “now you can bang out a quick blog.”

Without any topics on my mind at the moment I decided to go to the Archives. You might recall that I lost my original blog in December of 2018 and there were 250 old posts I have been reviving. But since I’d already reposted my obvious favorites I was stuck there, too. I mean, there are still some decent ones. Like the the time I achieved dream control. There is also the letter to my future self, as requested by Sister Kim, out there unrevived. And then, of course, there’s the one about being married to Mary Poppins which, as you can imagine, compares Mrs C to a Disney character that birds and turtles dance about magically.

It occurred to me I’ve never actually seen Mary Poppins. Do birds and turtles do that?

Nevertheless, I wasn’t feeling any of that this morning, so I decided not to bring them up. Please email your requests.

Suddenly it was 5:51 and I still had no topic. I decided to brainstorm a bit. There was that mock trial in the Senate starting today, the one in which both sides of the “jury pool” had publicly made up their minds in advance and in which no evidence or witnesses were expected. But since I had already made up my mind, as well, there was no reason to bring it up again today. I could talk about my life assessment spreadsheet (mentioned above), and how that helps me feel better about Tom on groggy mornings, but it’s Tuesday. Nobody wants self-improvement tips on Tuesday.

I thought I could just post a picture of my dogs wrestling: 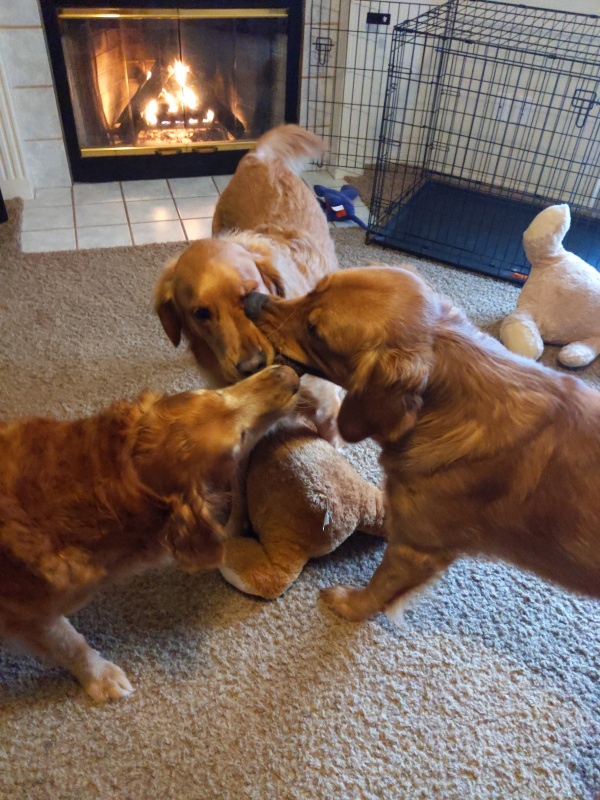 But then what? Now all we had was a couple hundred readers, a few words about nothing, and a cute pic of three golden retrievers biting at each other. How can that be a complete thing?

So I thought I would just abandon the project altogether. Live to fight another day. Maybe instead of posting I’d just go catch up on all of your updates out there, in all those social media outlets you inhabit. Maybe I’d check my Instagram. That’s a quarterly thing I do and it’s been about a quarter. Then I thought I could just play some Madden. The Rams are doing better there than in real life, anyway.

But, no, it felt like a waste. Maybe I could give you my Super Bowl pick instead? The Chiefs are favored to beat the Niners by 1 ½ in Miami but I don’t see it. In January and February the tougher team tends to beat the faster team and there is no doubt in my mind the Niners are the tougher team. Niners over Chiefs by a touchdown or two. Blech.

I reserve the right to change my mind about that over the next two, hype-filled weeks.

Alright, that’s enough. It’s 6:01 and I just wasted 3 minutes of your time with another blog about nothing.

Check the tagline about that, though. It’s still just me, most of the time.

48 thoughts on “Early on Tuesday”