I know I’ve been a bad boy.

Look, this last month has been difficult. Busy to say the least. Plus I had to put things in perspective. Spread some hope and progress. Remember why. But I realize in giving you all those things I neglected to share with you stuff like this:

And that just may be the unforgivable sin.

Marvel has been spectacular. I mean, really. I think I mentioned before that he appears to be karma the universe owed to me for the constant aggravation Ludo put me through in his first 2 years. Oh man, some of you remember the stories. Crate escapes. Shredded furniture. Back talk. Ludo was the epitome of the bad dog. My problem child. And when he wasn’t destroying plaster dragons or otherwise causing Mrs C and me to cry out “what the hell are you doing now?!” he was running into a skunk blast, having an allergic reaction to shampoo, or getting a poke in the eye from a low-hanging tree. He was cursed. And we lamented it.

But Ludo turned out to be a fine dog, and an excellent big brother (after some early doubt). And Marvel? He’s my morning companion when I read. Pretty good on a leash already. He’ll shake hands if not too distracted. He sleeps through the night, virtually every night, and I cannot tell you how much we, as working parents, appreciate that. He’s a Marvel, through and through.

(Which reminds me, maybe it’s all in the name. “Ludo” means “I play” and, boy, that one never stops.)

I took my little Marvel into the vet today, for his final round of puppy shots, and put him on that scale. First, let me tell you, he was an angel. Ludo, even Moxie, are damn near obnoxious in the waiting room. Whining. Fidgeting. Hard to handle alone, and a nightmare together. Marvel sat. He interacted with those around him. Other guests told me he was extremely well-behaved for his age. The vet tech told me he was darn good on a leash already. It was nice. My boy is only 106 days old. 3 1/2 months. That’s the terrible twos in dog years.

I mean, he has his moments. He’s starting to dig in the yard. He’s destroying a tree because he has a bark fetish. He scratches at doors, especially the closet door where we keep his food. Nobody’s perfect. But still…

The big story of the day was the weigh-in.

Let me put that in perspective:

I think Marvel was raised by a breeder from Jurassic Park.

We’ll see if that slows down. It has to, because if Marvel continues to be 70% bigger than his peers then as an adult he’ll be a 112-pound fuzzball. I think that would be some kind of record.

Thank you, my friends, for indulging me today and for your patience. It’s been 25 days since my last photo dump, and this is what has been happening since then. Be well, be kind, and love one another like you’re all 112-pound fuzzballs. 🙂 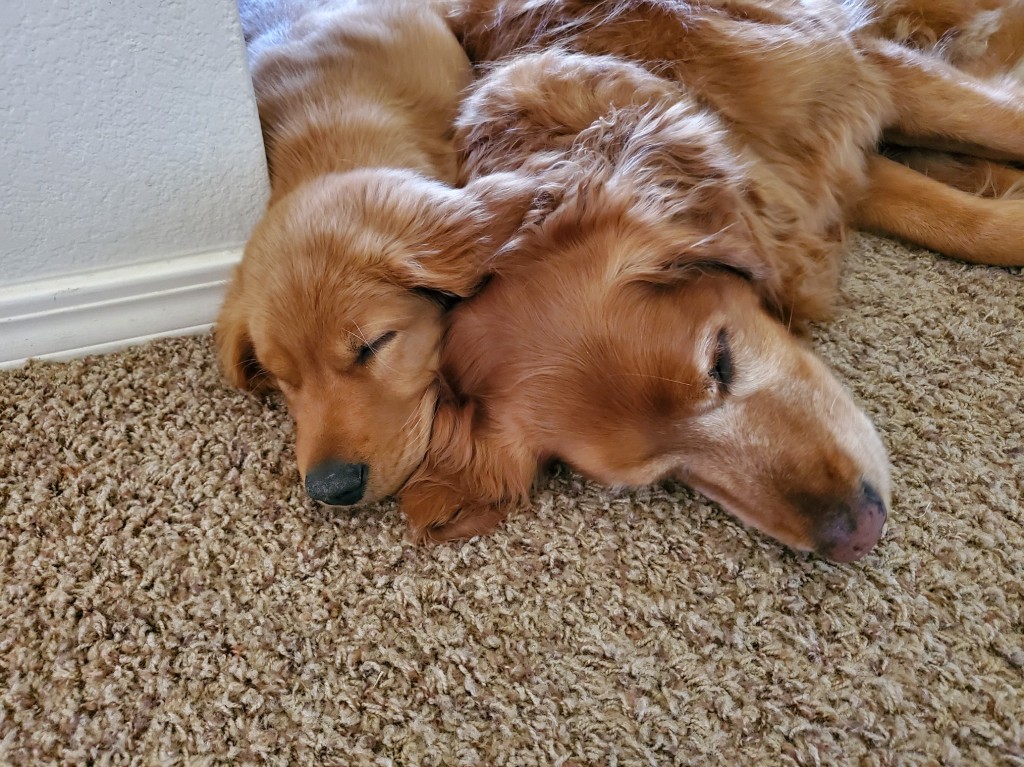 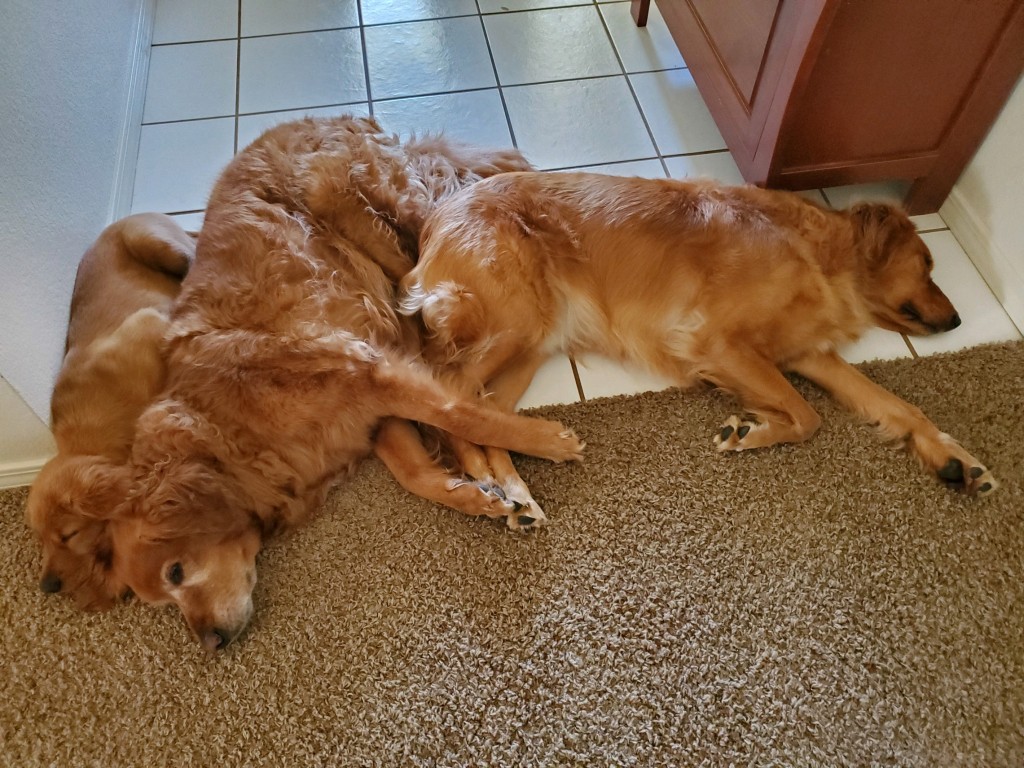 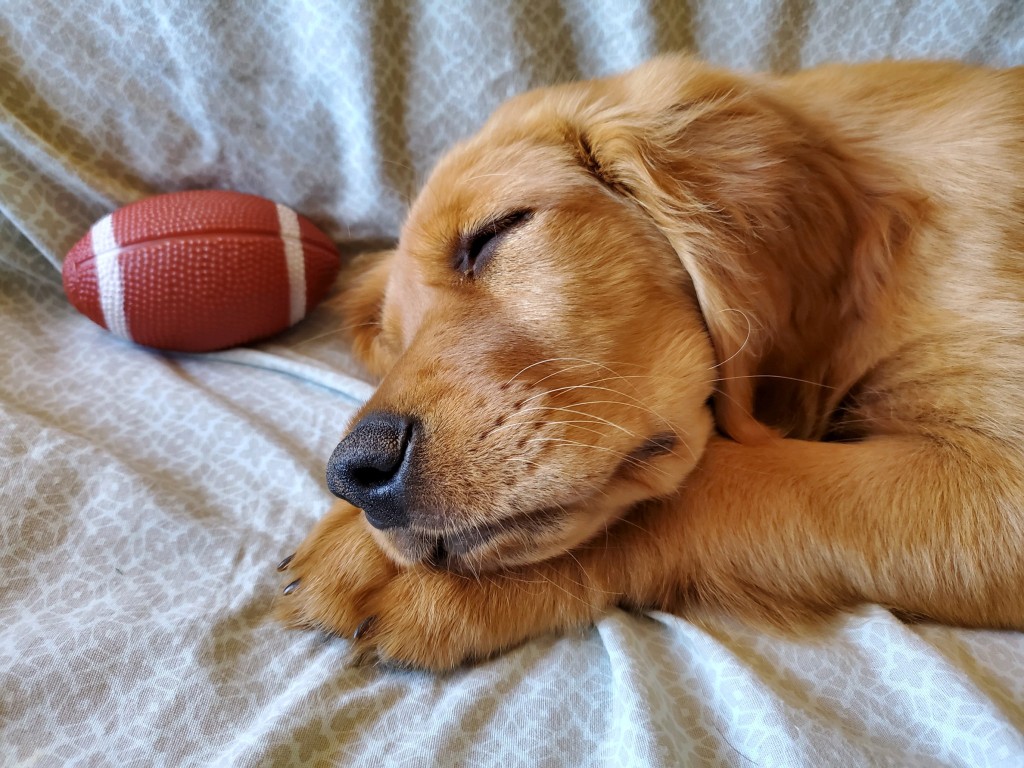 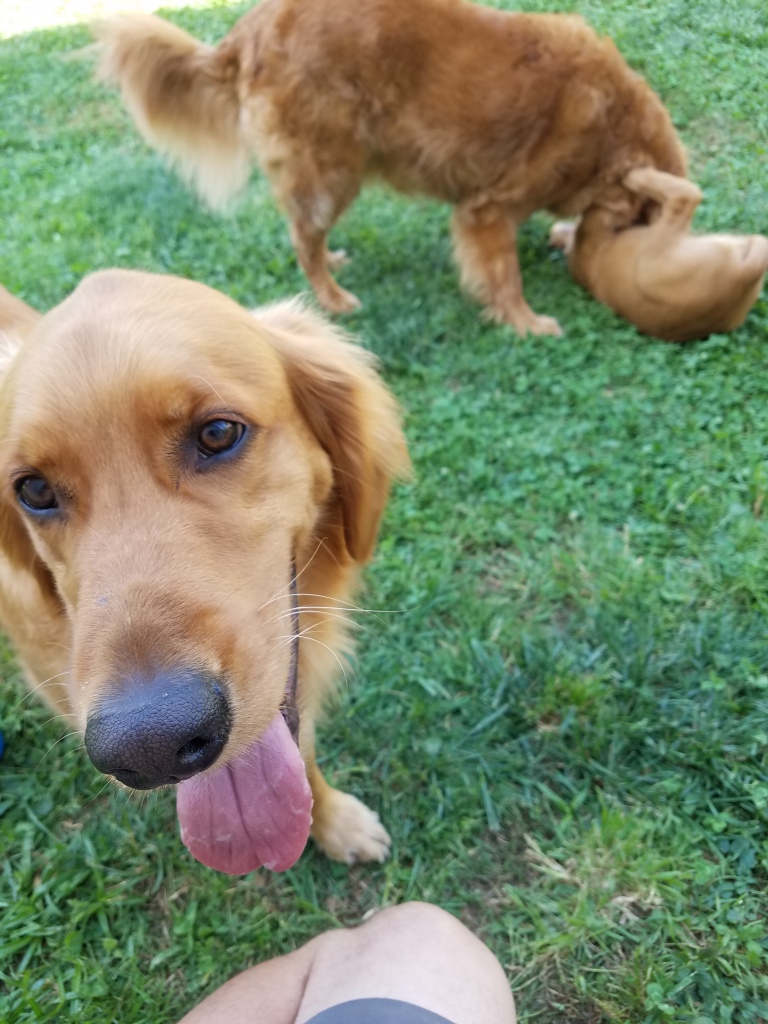 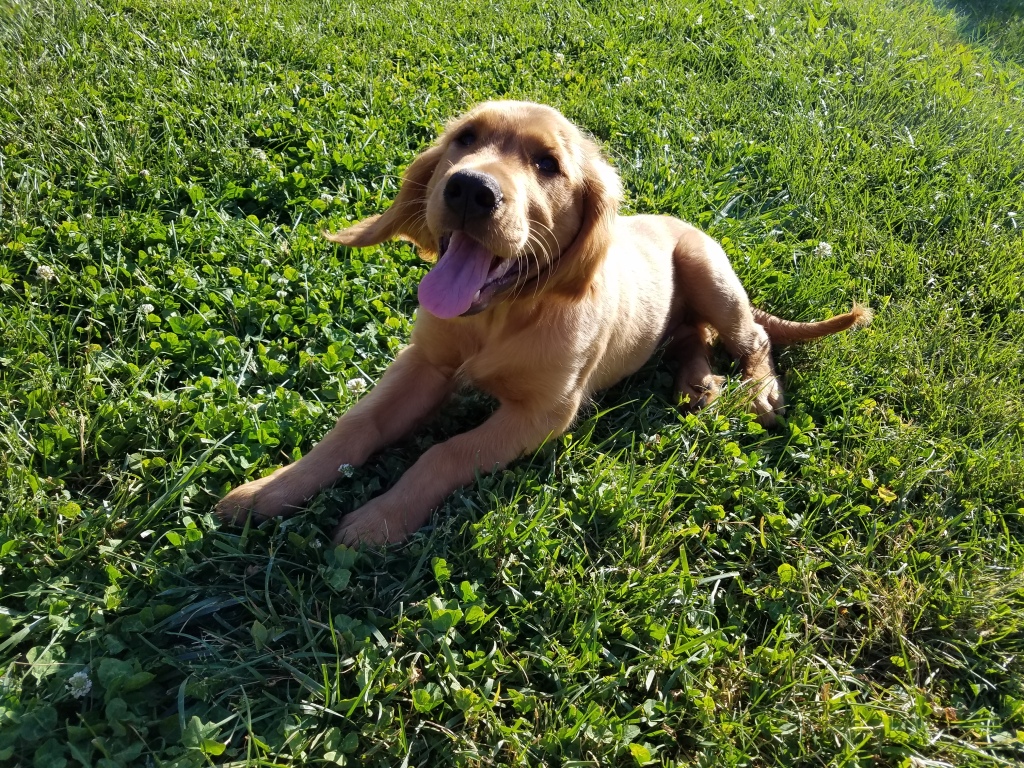 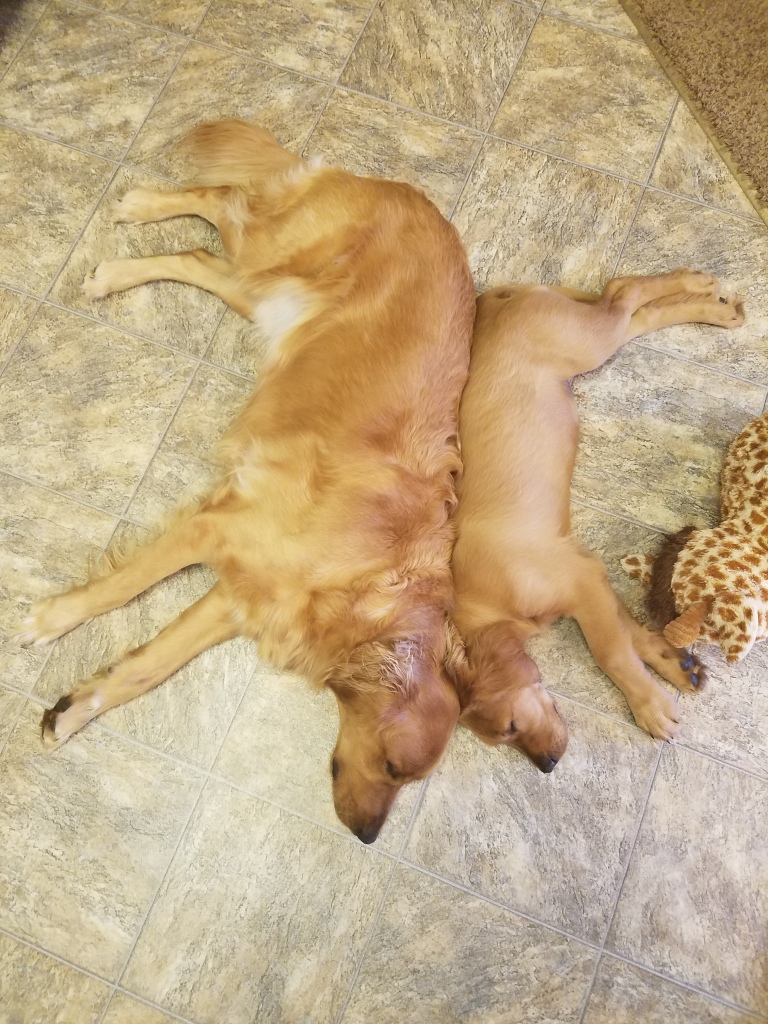 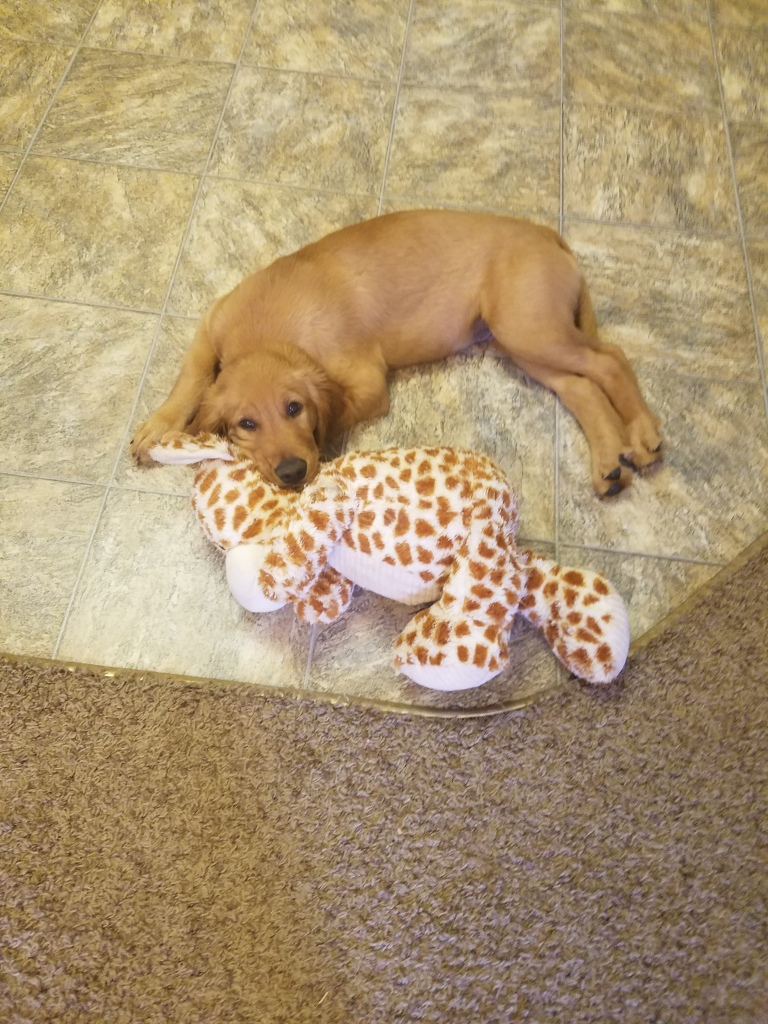 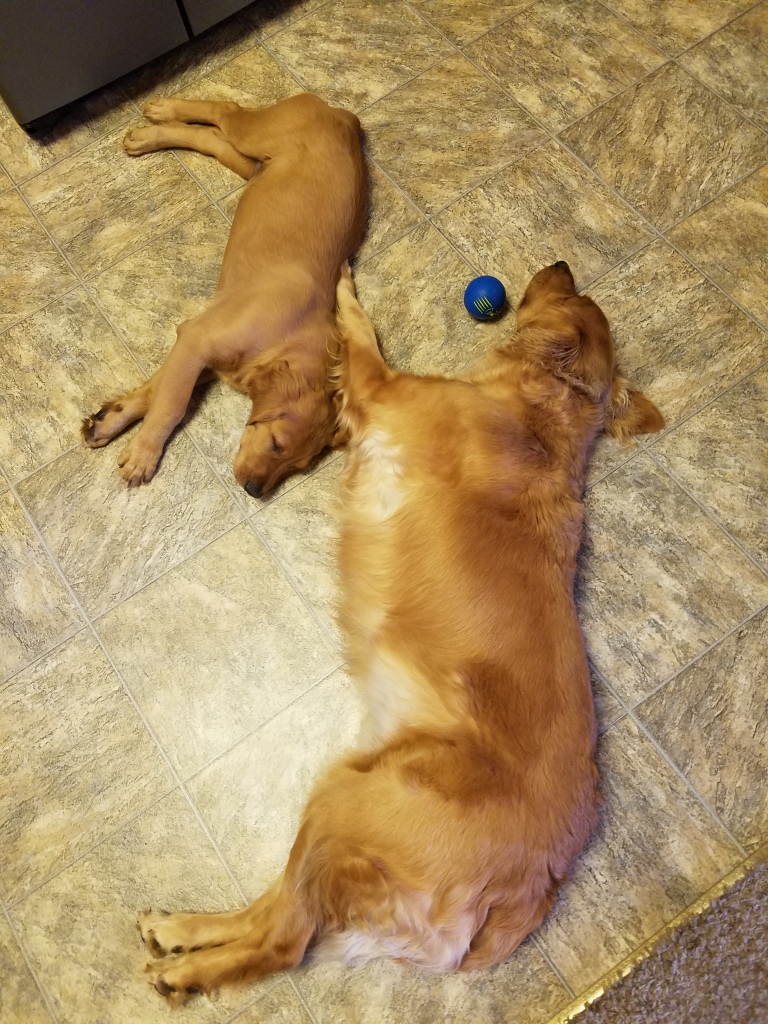 Til next time, then!

34 thoughts on “Since Last We Saw Our Hero…”