The optimism and inclusiveness of the DNC was a welcome respite. It was nice to see Democrats and Republicans – conservatives, moderates, and liberals alike – come together with a common purpose, despite a wide range of competing outlooks and ideas. Joe Biden was never my first choice, but his enthusiasm, energy, empathy, and compassion will be refreshing in post-Trump America. Next week will be all negativity, divisiveness, ass-kissing and fearmongering. I’ll pass.

It’s a shame. There was a time when both parties were equally terrible – maybe even equally hopeful and worthy of respect at times? – but the Republican Party is clearly lost in the charlatan’s shadow. Gotta find their soul, I think. Listen to the wiser members, those who are fighting against the authoritarian self-importance of Donald Trump. Folks like John Kasich. Colin Powell. Christine Todd Whitman. Mitt Romney. Even George W Bush and John Bolton. There are conservative voices out there for the Republicans to follow. They ought to.

I fell in love with politics in the early 90s and have done more deep-dig political and social analysis than I care to admit. I’ve taken courses, written papers, pushed others into political interest (for and against me!) and debated online and offline for more than 25 years. I started as a Limbaugh-conservative way back when and I’ve argued every far-right case. I remember the “triumphs” of the Contract With America and the December 12th, 2000 Supreme Court ruling.

I remember arguing vehemently with a professor or two in the years that followed about how righteous was the invasion of Iraq. I remember having a very strong stance, despite having my doubts. Doubts are normal. If you don’t have them, you lack objective thinking.

It wasn’t long after the election of 2004 when I really started giving credence to my own doubts. To my own objectivity. I opened myself up to alternative points of view. I read vigorously from the works of people like Joseph Stiglitz and listened to opposing views on economic inequality and social injustice. After 15 years I left the Republican Party.

I called myself a Libertarian for a while and dug into other tomes by the likes of Friedman and Hayek and Boaz. I read Ayn Rand. It didn’t take me long at all to realize this point of view, like conservatism before it, had merits but also did not align with my true north star, denied too long.

Even in the 90s I believed in stricter gun laws, for example, knowing how I do that such a thing produces a better, safer, and even freer society. Want to own a gun? I have no problem with that (conservative/libertarian). But you’ll have to go through a nationally-recognized regimen like licensing, registration, and background checks (liberal). I’ve always believed in the death penalty as deterrent and punishment, but I’m decidedly against the American system of mass incarceration. I’d rather a woman did not get an abortion, but I believe it’s her choice, not mine (or ours). I do not believe in any religion or god, but I support your absolute right to peacefully worship whomever you wish. It does not offend me when the Pledge of Allegiance includes the words “under God.” It does not offend me when it does not.

I have held a lot of these beliefs for a very long time, throughout my evolution in fact, but what has changed – and continues to do so – is my depth of understanding of each issue. I have always been against economic and racial inequality, but I had a simpler understanding of the pervasiveness of each in the first decade and a half of my evolution. In the last decade and a half I am more enlightened, wiser. I don’t mean that to sound in any way braggadocios. On the contrary, if I were a smarter man I would have learned earlier.

Today I am politically independent, or “No Party Preference” as it states in my registration. Some people mistake that as meaning “moderate,” but it does not. My views are decidedly on the left. In the political spectrum I’m in the lower-left quadrant, somewhat south and west of folks like Bernie Sanders. “Libertarian-Left” according to some scholars. I believe very strongly in personal liberty and economic equality. I believe that capitalism works best when regulated by progressive taxation and redistribution. I also believe that you should be allowed to love who you like and dress how you like. I’m strictly anti-authoritarian and I despise any individual who is intolerant of differences or wants to be a king.

Donald Trump is completely intolerant of differences and absolutely thinks he’s a king.

I have no problem with any individual of any party preference. I have problems with both parties – it’s hard to support any of the self-interested political machines – but not necessarily their individual constituents. I judge people by the content of their character.

I told you this last time and I meant it: I’d rather see an honest Republican in the White House than a shyster Democrat (and vice versa). I would have voted for John Kasich, for example, over Hillary Clinton. Character. That’s what matters.

Donald Trump is the lowest of the low when it comes to character. He has no kindness, no empathy, no compassion, no interest in the interests of anyone but himself.

But enough about him.

I’ve been working hard to get Dylan ready to be my right-hand man when I take over the store – that plan is still in the works but delayed by certain personal and worldly events. He’s come along great. Amazing, in fact. He has a natural understanding of processes and ideas and people. He’s a willing and eager learner. I found the right man for the job.

Mrs C is getting more and more responsibilities at the bank; they love her and she loves it. We’ve been laying low for months, except for work and an occasional beer with the neighbors, for obvious reasons. We cook some and do some take out. She switched to a fasting diet during the week (the carb restriction one didn’t work for her) so she doesn’t eat nights. Left to my own devices I consume too many frozen burritos. I’m gonna try to change that next week, by grilling more meat and veggies. Wish luck. Health matters.

Moxie is in poorer health. The fella is gonna be 12 in a couple of months – old for a gold. His latest checkup indicated kidney problems so they’ve asked us to change his diet. They are optimistic they can help him get those kidneys back on track and give us a few more years with our angel. They are always optimistic, which is good. I see it in his eyes sometimes, though. He doesn’t understand. 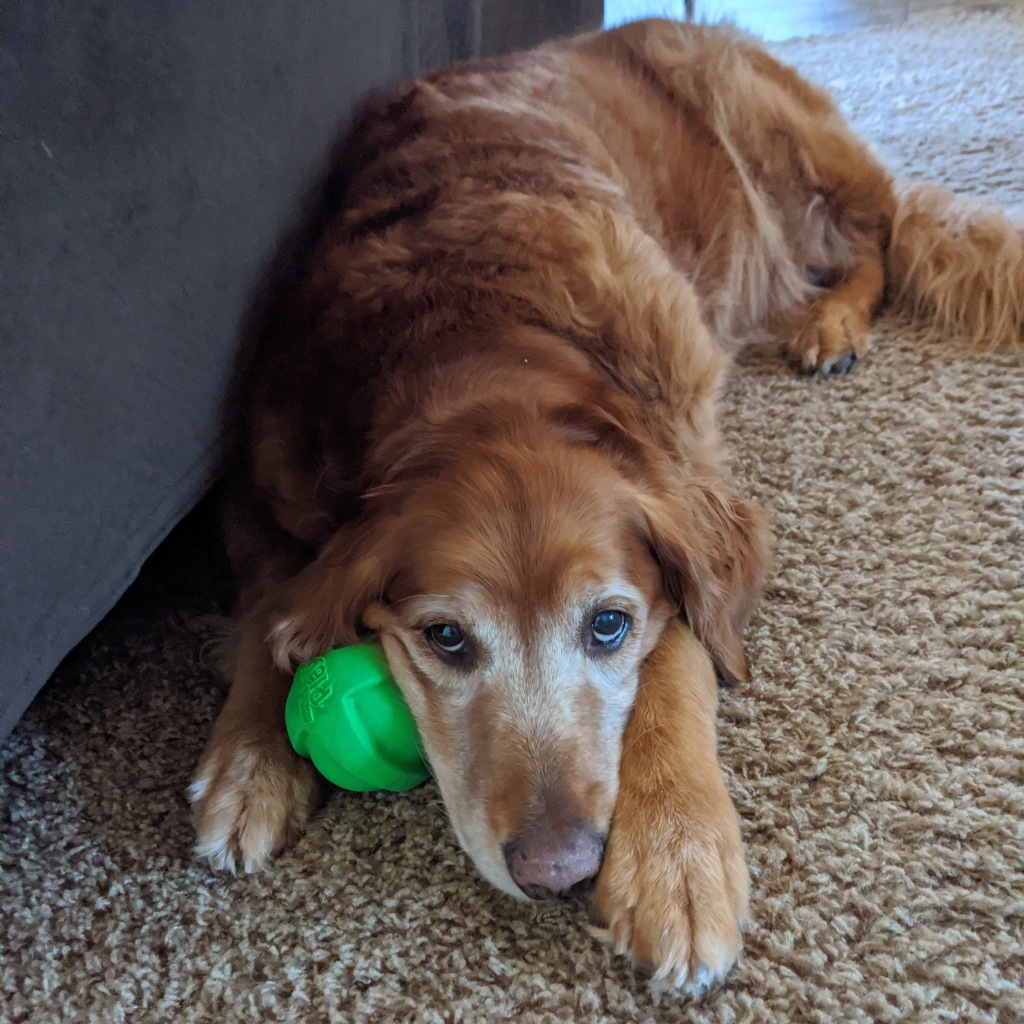 Work, home, politics, and pups. Is it any surprise my update would feature such?

Just you wait, though. Football is almost here. 😉

Have a great weekend now, folks. Stay safe and hopeful. A better world is coming! 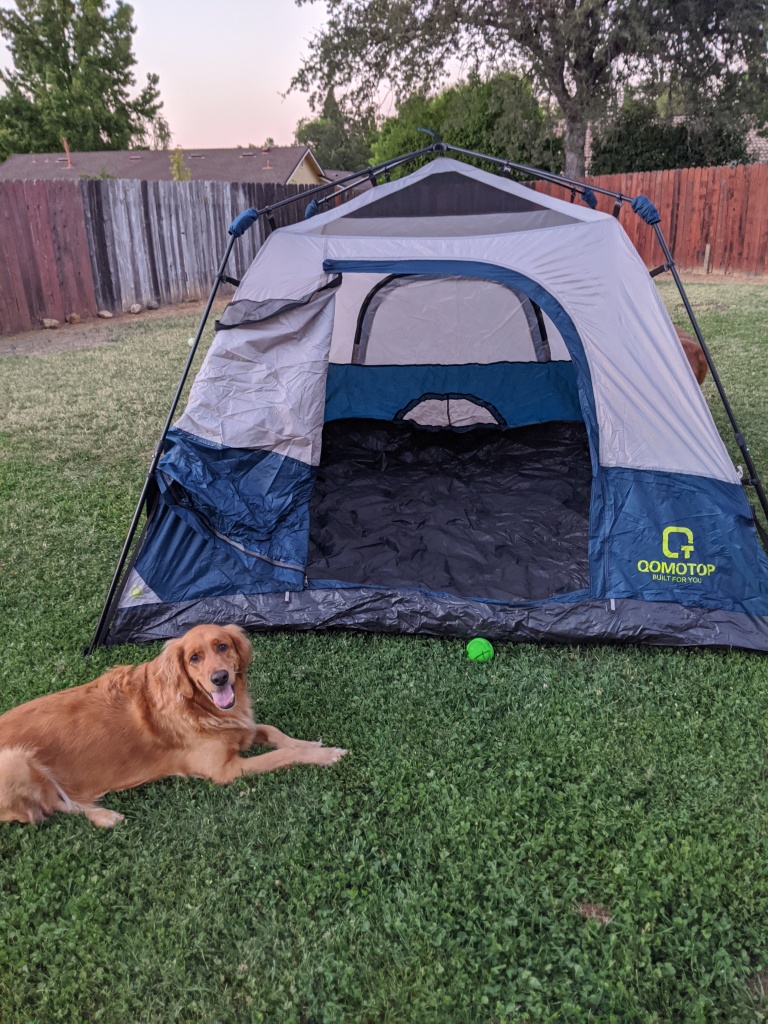 27 thoughts on “On the Evolution of Tom”

Leave a Reply to Tom Being Tom Cancel reply